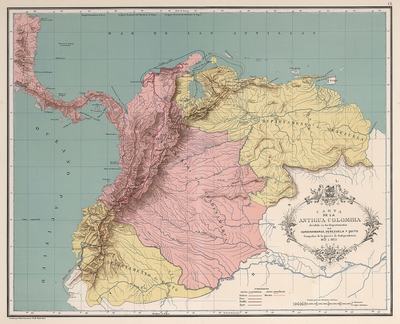 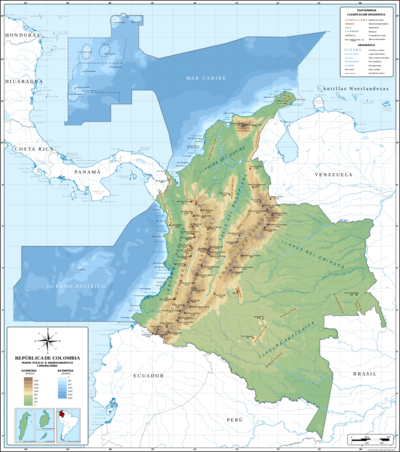 Colombia was discovered in 1499 by Spanish conquerors and has been settled since 1511. However, long before the arrival of the Spanish, the area of present-day Colombia had been populated by several Indian civilizations who were mastering the art of goldsmithing at its height. Between the years 4000 B.C. until the year 1600 A.D., they were manufacturing clay into thousands of figures and objects. Due to the geographic dispersal and the nature of the country, precolonial Colombia has not come up with a unified form of government comparable to the Incan Empire of Peru. Instead, there were several Indian tribes colonizing the country, leaving behind artifacts such as jewelry and statues which can still be visited today.
There are a few tribes to be emphasized; the Muisca who lived on the plateau of the Eastern Cordillera; the Tayrona who built the so-called Ciudad Perdida in the Sierra Nevada de Santa Marta as one of the first cities on the South-American continent; the Sinú who populated the area along the Sinú River; the Quimbaya in the area of today’s coffee region on the western side of the central Cordillera; and last but not least, the mysterious cultures of San Agustín with their stone sculptures and the Tierradentro with their painted tombs, having reached their height long before the arrival of the Spanish.
The “discovery” of Colombia by Alonso de Ojeda and Amerigo Vespucci took place in 1499. Both explorers initially landed on the peninsula “La Guajira” which they named “Isla de Coquivacoa” thinking that it was an island. Further parts of the country were discovered afterwards by Rodrigo de Bastidas or Juan de la Cosa, among others, who explored and frequently also plundered the place. The conquistadores, attracted by gold and emeralds, occupied the country in rapid succession. Gonzalo Jiménez de Quesada, for example, who founded today’s capital of Colombia, Santa Fé de Bogotá, and Sebastián de Belalcázar, who initiated the founding of cities in Colombia; Cali and Popayan are two examples.
Due to its central prominence of the Spanish occupation in northern South America, Bogotá became the place of the “Viceroyalty of New-Granada.” During the colonial period, Cartagena de Indias evolved into one of the most important and highly protected ports of the New World. After the discovery of Central America by Spanish sailors, Santa Marta (1525), and Cartagena de Indias (1533) bacame the first colonial bases at the Caribbean Coast of Colombia. Shortly thereafter, a province was founded and later turned into the Viceroyalty of New-Granada. The prosperity of the country is regarded as the reason for several pirate raids on the harbor town fortress of Cartagena which were led by Sir Francis Drake in 1544, 1560, and 1586.
During the 17th century, about 80 percent of the worldwide gold production came from Colombia. Many indigenous Americans were working in the gold mines of the country and died in large numbers due to illnesses introduced by Europeans. After which, the work was undertaken mostly by African slaves who could be brought in via the port of Cartagena. The city was attacked in 1741 by an English armada of 186 warships and defended by Spanish troops led by Don Blas de Lezo.
The conflict, resulting in Colombia’s independence from Spain, took place between 1810 and 1819. In the beginning, there was a dispute between a group of American rebels and the Spaniard José González Llorente in Bogotá. The Americans had asked him to leave them a flower vase, and by not doing so, José González Llorente insulted the rebels, who in consequence started a revolte that escalated into a “shout of independence”.
Colombia is one of the countries that was formed as a result of the breakup of Gran Colombia in 1830 (the others being Ecuador, Panama, and Venezuela). Until 1861, it was still called New-Granada whose name was changed into Colombia in honor of Christopher Columbus. Until the year 1903, modern-day Panama belonged to Colombia as well. Only in 1886, Colombia was able to unite and became a centrally administrated republic, and put to the proof again in 1898 when persistent internal conflicts erupted into the “Thousand Days War.” Between 1899 and 1902, oppositional liberals fought against the conservative central government without either one of them coming out as the winner. The devastating conflict with over a hundred dead was finally alleviated by a peace contract, assuring the liberals of a government participation in the future. Nevertheless, the “conservative hegemony” from 1886 survived until 1930.
Much more serious than the materialistic devastation of the war, however, was its aftermath regarding foreign affairs, in which the USA took advantage of Colombia’s weakness in 1903 to assert its geostrategic interests in Panama. For Theodore Roosevelt, United States president from 1901-1908, the construction of a canal across the Isthmus of Panama was regarded as a military importance. A separation was created by poor integration of the isthmus into the central state of Colombia as well as a feeling of being infantilized and ignored by those responsible in Bogotá on the part of the local trade oligarchy. Prior to this, the Colombian senate had rejected the construction of the Panama Canal expedited by the USA with reference to an imminent loss of sovereignty where upon the United States, in coordination with the Panamanian separatist movement, enforced the independence of the isthmus department. Colombia had come out of the Thousand Days’ War so weakened that it accepted reluctantly the militarily shielded takeover in Panama City.
In the first half of the 20th century, Colombia underwent a period of economic prosperity. In the 1920s, coffee represented up to 90% of Colombia’s export and facilitated the country’s investment into the expansion of transportation infrastructure and the strengthening of governmental institutions. In the middle of the past century, two political groups with different ideological concepts began to establish their claim of the state leadership: the Liberal Party and the Conservative Party. Later on, a breakthrough of other societal groups developed and sought to extend the political spectrum of the country; ethnic minorities, Indian tribes, and independent public campaigns were then integrated into the political events of the country.

One of the most valuable memories of this country are without a doubt its people!
Attend the local festivals to see the Colombians’ pure joy of live, expressed by their local music, dance and food.

Find in the following a brief chronological overview of some of the most important and recommended Festivals: 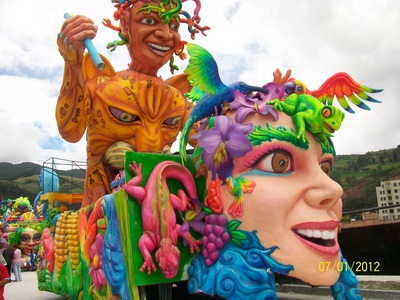 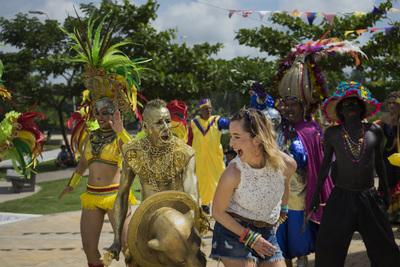 PLACE: Barranquilla (Caribic Coast)
SPECIAL FEATURE: Certainly one of the most spectacular carnivals in South America. Represents with its parades the mestizo population and the fusion of cultures and races. It has been declared a UNESCO heritage. Amazing musical mix of rhythms like Cumbias, Porros, Fandango, Mapalés 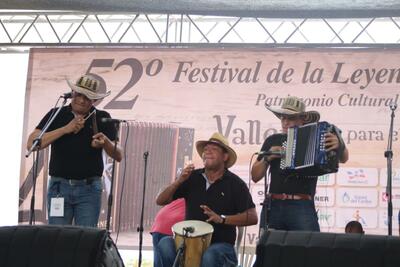 PLACE: Valledupar (north – east Colombia)
SPECIAL FEATURE: Vallenato is, as well as the Cumbia, the prevalent music style along the Atlantic Coast of Colombia. It is traditionally played by an ensemble of accordion, drum and güira. Everybody who wants to enjoy the world’s best Vallenato music must visit Valledupar by end of april. 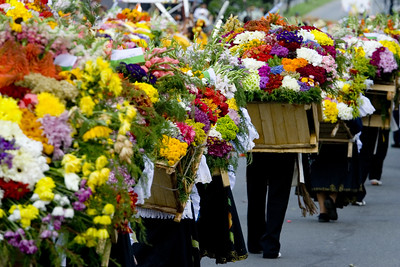 PLACE: Medellín
SPECIAL FEATURE: Horse parades, orchids – and bird exhibitions as well as the special parade of the Silleteros (men and women from the village of Santa Elena), who carry at the Flower Festival original and beautiful flower arrangements on their shoulders. 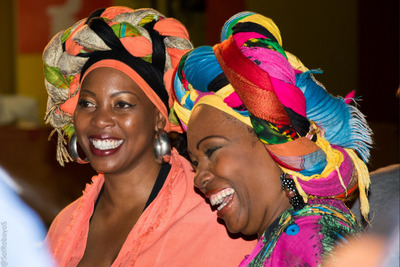 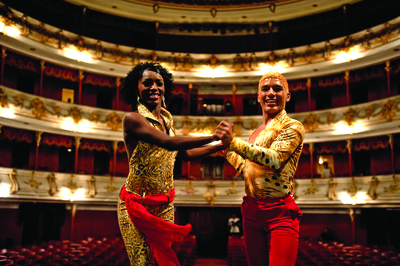 PLACE: Cali
SPECIAL FEATURE: The main attraction is the salsa music: Both, orchestras and dance groups are invited to perform. This is where the world’s best salsa dancers show up!

Colombia can be visited all year round and we assume that the visitor gets good weather in every part of the country, apart from some little exceptions.

The intertropical zone in these latitudes makes that the temperature depends on the height above sea level. As a general rule there can be said that per increase in height by 1000 meters the temperature shrinks by 6°C.

There are no seasons in Colombia, they only differentiate between winter (rainy period) and summer (dry period). Normally, the dry period is from December to March and from Juli to August.

The rainy period is generally during April, May, October and November. Whereas it doesn’t rain permanently during these months, the rain falls are rather short and occur once a day.

But it is highly important to announce that because of the meteorological phenomenons „El Niño“ and „La Niña“ it has been very difficult in recent times to predict the weather exactly. Many times the weather really surprised us…

The main vacation an travel season starts with Christmas more or less for the local tourism and ends in January, as well as during Eastern and from the middle of June until the middle of July. 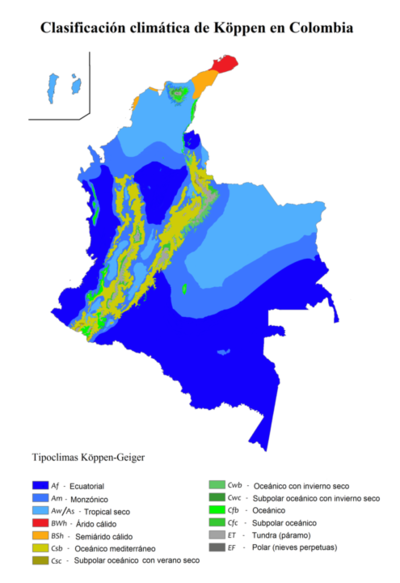 Tropical climate with an average temperature of 25°C, here they call it „Tierra Caliente“.

Moderate climate with an average temperature between 18 and 24 °C, also known as „Tierra Templada“. It is equivalent to Central European summer climate.

Cold climate between 12 and 18 °C, also known as „Tierra Fría“. It is equivalent to European Central Climate like in spring or autumn.

“Páramo“-Landscape with temperatures above 12°C.

All year snow cover or glacier.

Good news first: Colombia is as safe to visit as any other destination in Latinamerica!

Although it is out of question that there still are a few areas of conflict, these are far off the beaten track and therefore don´t affect our clients’ journeys. However, just as in any other destination, it is recommended to take certain precautionary measures when travelling through the country. Please stick to the following basic rules: 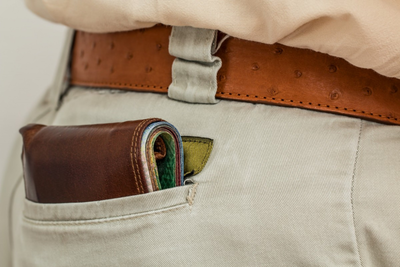 • avoid desolate and dark streets
• don’t present jewellery and other valuable objects openly
• wear your camera, your purse, and your passports as inconspicuously as possible and close to your body
• keep your eyes on your luggage at all time
• try to avoid overnight busses if possible
• try to reserve a taxi through your guide or your hotel
• change your money exclusively in safe places where it is impossible to be observed and don’t accept any help from strangers
• keep small amounts of money handy but leave large amounts of money at home or in the hotel safe
• don’t trust strangers if you have a bad feeling
• trust in your intuitions and common sense

Please copy your passport, your flight tickets, and your traveller-checks. You are supposed to have your passport or ID card on you at all times, in case you are being controlled (however, usually a copy is being accepted as well).

Don’t hesitate to contact us if you need more detailed information. To be able to provide the most precise and up to date information, we are in constant and close contact with local entities, the German embassy, and our worldwide partners.