Our international team is composed of local experts with different back grounds and different origin.  No matter if biologist, tourist manager, engineer or geologist, the things that we all have incommon are the love for Colombia, the drive to explore and travel, as well as customer focus.
Each one of the team knows the prettiest corners of this country and is constantly extending his or her expert knowledge by visiting new exciting places, to be able to provide the best possible service to you.
We reply to your requests in German, English, Spanisch, French or Italian. 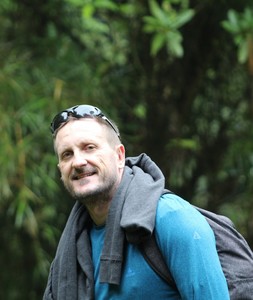 Torsten hails from Southern Germany and came to Colombia in 1995. Before that, he had traveled through Colombia by bicycle. Impressed by the kindness of the Colombians and their zest for life, it was very easy for him to decide to move here permanently. He has lived in Bogotá for many years now, is happily married and has 3 children. Torsten is also a passionate football player, and in his spare time he loves to play in one of the many football fields in and around Bogotá. At Promotora Neptuno he is responsible for the general corporate concept of PROMOTORA NEPTUNO and manages the “Incoming” department. He enjoys sharing his passion for Colombia with others! 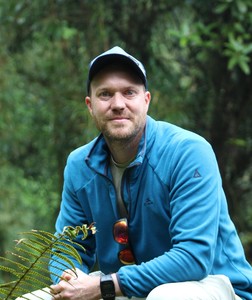 As a geographer, Stephan has been fascinated since his first visit to Colombia by the diversity of the landscapes in Colombia. He has lived in Colombia since 2008, and in May 2011 became a vital member of the incoming team of Promotora Neptuno. At the beginning he worked as an incoming & marketing manager and also taught evening courses of geography at one of the university in Bogotá, but since 2018 he is businesspartner and head of the incoming department. 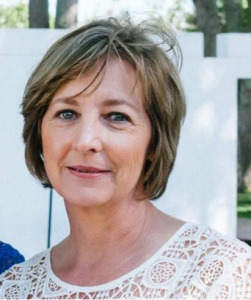 Angelika is German and lived for more than 17 years in Santa Marta before moving to Bogotá. She is married to a famous Colombian biologist. Before joining PROMOTORA NEPTUNO, Angelika studied nutrition, and the team can appreciate her nutrition skills particularly at Christmas-time, when she pampers us with her delicious home-made German Christmas pastries. Thanks to her years of experience in the travel industry, she is an expert in planning trips throughout Colombia and always manages to satisfy our clients’ needs and expectations. Christiane is married and has a cute little daughter. She is a graphic designer and found her way to the tourism industry through her passion for travel. She is responsible for planning tours and for the international promotion of our trips through Colombia. 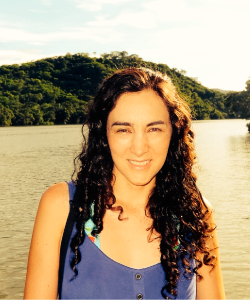 Natalia was born and lives in Bogotá, but also has lived in Canada, Chile and Australia and enjoys sharing with people abroad the wonders of Colombia. She studied International Business in Sydney and has always liked working and being in an international environment. She is happily married to a German and has a cute little baby. She loves travelling and enjoys promoting and planning tours around Colombia. 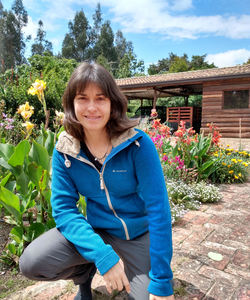 Camila grew up in Colombia and has travelled with her family through the whole country during her childhood and youth. Thus, she developed a great affection for the natural and cultural diversity of Colombia. She lived almost 10 years in Germany, where she studied ecology and worked in that area. After this experience abroad, she returned back to her homeland. Since 2016 she is part of the Neptuno team. 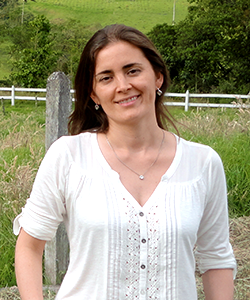 Paola was born in Colombia and studied Business Administration. She has good experience in different industries and discovered her passion for tourism by traveling. She has lived in San Diego, CA and Dallas, TX where she had the opportunity to share and learn from multicultural environments. She is now married, has a little daughter and enjoys designing and planning travel packages for people around the world to come to visit her beautiful country of Colombia. 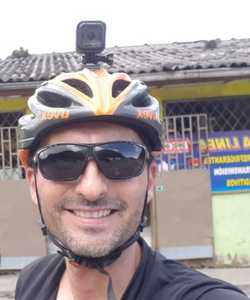 Julian is an enthusiastic traveler and a business administrator with a specialization in hotel and tourism business. He loves his family and since 7 years he is married to his wife Camila. They have a little boy called Benjamin. With his job as an incoming manager, he is delighted to be able to promote and organize trips around Colombia for everyone around the world who wants to visit and enjoy this beautiful country. He´s proud to be an urban cyclist for almost 10 years and enjoys riding his folding bike everywhere he goes. 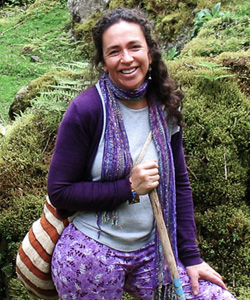 Maia is Colombian, with a degree in anthropology. She has been involved with tourism all her working life – in adventure, natural and cultural tourism projects – and she has a special interest in the respect and conservation of the natural and cultural assets of her country. She loves travelling and she has guided numerous people across the Colombian territory. She is responsible for designing and planning trips for foreign people interested in her country. 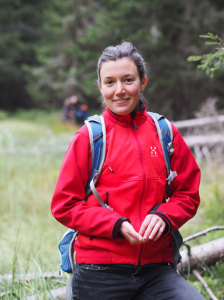 Céline grew up in south of France where she spent a lot of time skiing and hiking in the Alps with her family. She is an architect who first came to Colombia in 2008 to study Latin American cities. Her passion for outdoor activities and traveling led her to change the drawing table for her current work in tourism. 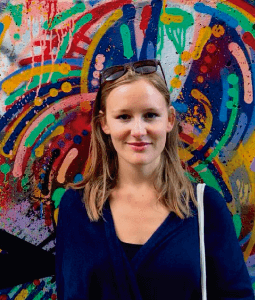 In 2015, during her university studies of Tourism Management, Janah became aware of Colombia. Therefore she decided to participate in a work placement at Promotora Neptuno, to get to know better Colombia and its diversity. Thanks to the travelling with Neptuno, she noticed soon that this could be her new home country. Also she really liked working with Promotora Neptuno. That’s why she is part of our team since 2017. 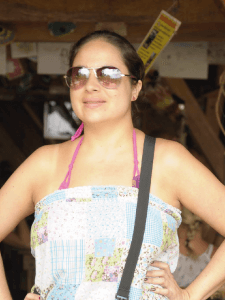 Passionate about Colombia and her people, Paola studied Business Administration focused on Tourism in Bogota after undertaking specific travel and tourism courses in England and France.She has had the opportunity to travel around the country and its culture, traditions and, above all, its gastronomy surprise her every time. She feels that this is her way of doing her part by showing Colombia to people who enjoy unique experiences and come to visit different regions.She is an expert on the Caribbean Coast, since she has had the opportunity to live there. 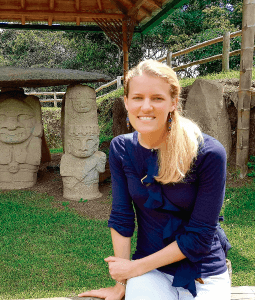 Claudia grew up in the Rainbow Nation South Africa. She has lived in Italy, Austria and now Colombia. Her greatest passions are languages, cultures, travel, food and salsa! She strongly believes that “the best way to learn about one´s own country is to leave it” (Henry Rollins). Travel changes the way we see things and this is precisely why Claudia has proudly joined Promotora Neptuno in Bogotá. Frederik was born into tourism through his family. After doing an apprenticeship at his father´s travel agency in Germany, studying tourism management in Austria and working for 4 years as product manager for Asia at a grand German hiking tour operator, he has now arrived in Colombia. It had long been clear to him that he is going to leave Germany – he only needed to sort out, where to find his new home. It was quite a long journey with trips to various countries, on each continents, until he finally lost his heart here in Colombia and followed it in 2018. Lina is an energetic Colombian. When she turned 16 she travelled to London where she studied Theatre and Linguistics at the university. She married an Italian and together with him and their son Matteo they lived in Italy for a while before returning to Colombia only 10 years ago. Lina has always been connected to the world of tourism, especially hotels. However, while looking for a change in her life, she now switched from hotels to organizing trips, and is happy to assist you as a new member of Neptuno. 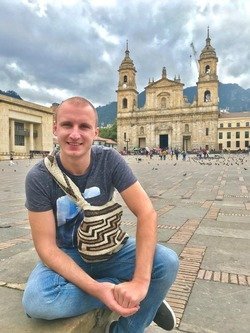 Dennis is german and came to Colombia for the first time in 2018 to travel around the country and couldn´t help but falling in love with it. He visited Cartagena, Medellin, Santander, Bogota and its sourrinding and was amazed with the different landscapes Colombia has to offer. The same year he came back to improve his spanish and to explore more destinations. After a few months it was clear that he wanted Colombia to be his new home. After living in Australia, Singapore and traveling around Europe and Asia, he decided to continue growing his passion for tourism on this side of the world. 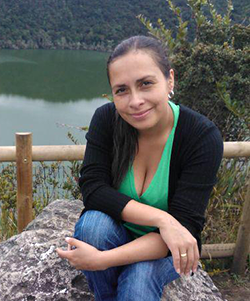 Jaqueline was born in Bogotá where she also lives. She is happily married and has two pretty girls. She is a professional tourist guide and studied airlines and travel agencies management. She loves to travel, especially around her own country. She also loves to meet people and to get to know other cultures. She enjoys promoting the different Colombian destinations and loves to receive many visits from foreigners to give them some special experiences in this beautiful country. 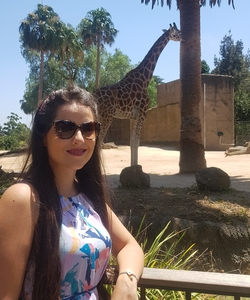 Andrea BoteroProduct and Content
Spanish, English, German
With Neptuno since 2015

Andrea was born and lives in Bogotá and is part of Neptuno’s team since May 2015, she is a flight attendant and has a specialization in tourism and travel agencies. She has lived in Germany and The Netherlands learning German and Dutch. She has three little kitties and loves all animals. She likes travelling around the world, meeting places and enjoys sharing with new people. 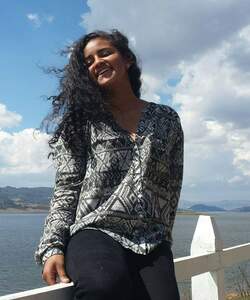 Luisa is born and raised in Colombia. She loves sports, music and dancing (specially colombian salsa) and is currently studying International Business. Although she hasn’t had the chance yet to explore Colombia to its core, she is convinced that every visitor is going to leave this country with a unique story of special moments that will last a lifetime. Maxi was born and raised in Bogota. His father is German and his mother Colombian, which is why he graduated from the German School in Bogotá. He is currently studying Finance, Government and International Relations at the University Externado in Bogotá and helps out at Promotora Neptuno in his spare time and vacations. His hobbies are soccer, tennis and travelling and he firmly believes that Colombia is one of the most diverse countries in the world. For him, Colombia should be on the bucket list of every enthusiastic tourist 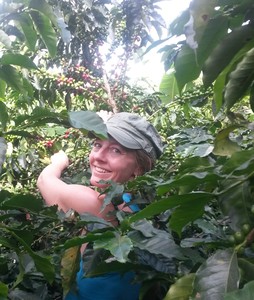 During her studies on international culture and business, Verena already developed a passion for South America and the tourism sector, which was reinforced by a year abroad in Argentina. By now, she benefits from almost 10 years of incoming-tourism experience. For a couple of years she worked in an incoming agency in Venezuela before returning to Germany. Here, as head of sales for South America of a German agency, she sent South American tour operators to Germany, Austria and Switzerland. However, the wish to return to South America remained, so in October 2018 Colombia, which she had already explored on various trips, became her family´s new home and here she has been supporting our team since. Her free time she spends mostly in the mountains, hiking or climbing with her husband and little daughter. 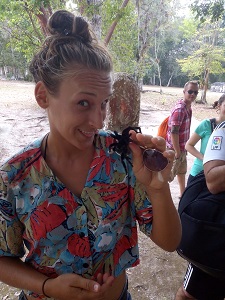 Since her internship in Peru in 2010, Lena got bit by the travelbug and was curious for new cultures, landscapes and surfspots. In 2017 her search for waves brought her to Termales, Chocò, where she fell in love with the locals and the area and decided to stay in Colombia.As her passion for languages, travelling and outdoor unfortunately don`t go too well with her up to then engineering profession, she changed courses towards tourism and supports our Neptuno-team since 2018.

OUR COLLEAGUES FROM THE OTHER DEPARTMENTS